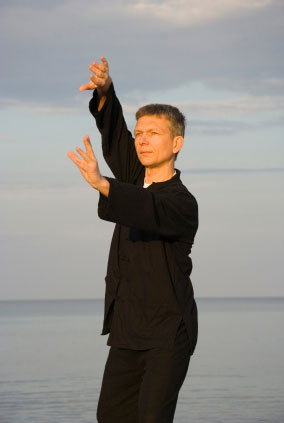 QiGong is one of the four pillars of Oriental medicine:

A spiritual practice, QiGong encompasses many different styles, some used to address specific health conditions and others for general health and well-being.

Loosely defined, anything that you do with the intention of harmonizing Qi (increasing and stimulating the flow of oxygen and subtle energy throughout the body) through breathing, meditation, and gentle movement, can be considered a form of QiGong.   Tai chi is the most well-known forms of QiGong in the west.

A principle of Oriental medicine is that all disease stems from an imbalance of Qi flowing throughout the 12 vessels of the body.  There are various points along these vessels where the flow is closest to the surface of the body.  These points are called acupoints and are stimulated using acupuncture, acupressure, and massage.  These vessels and acupoints cannot typically be seen by the human eye, therefore in QiGong visualization is used to “see” these vessels and visualize the oxygen-rich blood flowing freely, nourishing and healing the body.

Let's take a closer look at the principles of QiGong, how it originated, and the physical, psychological, and spiritual health benefits it offers.

All QiGong styles are based on the following principles: 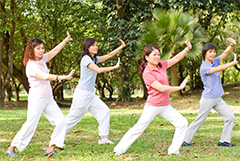 QiGong is practiced by more than 80 million people worldwide (with much more predominance in China).  Today, millions in China practice QiGong daily in gyms and parks, and it is considered a basic health maintenance ritual.

Larger and larger numbers of people are now practicing QiGong in the west.  The most common form is tai chi, now taught at many martial arts studios, community centers, and gyms.

The practice and documented history of QiGong dates back approximately 2,500 years, however Chinese historians and archaeologists have found references to techniques similar to QiGong that date back to 5,000 BC.  QiGong was first used for healing during the Han Dynasty as is referred to in the ancient Chinese medical text "Huang Di Nei Jing" (The Yellow Emperor's Classic of Internal Medicine), originating between approximately 300 and 100 BC.

The illustrations of Chinese healer Hua Tuo showed figures performing movements similar to wild animals, such as the crane, bear, monkey, and wolf.  Legends from the Shang dynasty describe how tribal members would perform exercises that imitated the movements of wild animals to cure conditions related to the cold and dampness.

As QiGong developed through the centuries, it became incorporated into two religious systems:

QiGong philosophy and techniques are mentioned in the classic of Taoist philosophy, the Dao De Jing, written in 4th Century BC by Laozi.  The Taoists used QiGong to achieve an empty, alert, limitless state of consciousness, and cultivate a body and spirit in balance.  Taoists and QiGong practitioners were both looking to harmonize the balance of Yin and Yang.

"By concentrating the Qi and making your body supple,
can you become like a child?"

Many writings on QiGong can be found among the approximately 1,100 texts in the Taoist Canon. (Dàozàng)

Several styles of QiGong were developed by Buddhists as both a healing system and as an exercise to complement days predominated by lengthy seated meditations.  The emphasis is on experiencing tranquility and awareness.

As Western medicine became popularized in China, many of the ancient healing traditions were neglected; however, during the Communist Revolution, Chairman Mao began to endorse QiGong and other natural practices as a cheap and effective healthcare treatment for the millions of Chinese that had no access to healthcare.  This led to the integration of Oriental medicine and western medicine and the opening of the first QiGong hospital in 1953 in Beidaihe, China.

The 2 methods of QiGong:  Internal & external...

The 2 methods of QiGong:  Internal & external...

There are two methods used to practice QiGong:

Internally (self-practice)
With internal QiGong, individuals are taught QiGong techniques and learn how to balance their own Qi.  This can be done by locating an instructor and taking a course or classes (similar to a yoga class type participation). 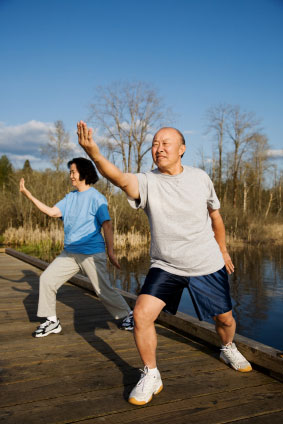 Although QiGong techniques have become popular in the west (with tai chi being the most recognized and widely known), the training is not standardized and certification/licensing is not required.

Students and people with health conditions should apply the same judgment in finding a QiGong teacher or Master as they would to any other energy-healing practitioner.  If choosing to attend a class, ask the instructor if you can visit a class so that you can see their instructional approach.  A good teacher will always be open to questions and invite prospective students to watch their classes.  Talk to students of the class and ask for some feedback on how the class has benefited them.

Fees vary considerably depending on the number of classes or treatments and the location of the practitioner.

Self-practice of QiGong teaches us to become self-aware, including an awareness of and control over involuntary bodily functions such as blood pressure and respiratory rate.  Though similar in this respect to biofeedback, no technical devices are needed.

QiGong techniques are so gentle they can be practiced by the young and the elderly, and by athletes and pregnant women.  It is a method of self-healing that is simple, cost-effective, and only requires 30-60 mins a day to experience significant physical and psychological benefits.  QiGong practice leads to better health, increased vitality, and a sense of peaceful alertness.

Practices can be tailored to the needs of each individual, and QiGong is often used as a complimentary therapy to conventional medicine when recovering from illness or injury.

Conferences in the US and China have been held to research the benefits of QiGong.  It has been shown to improve posture and respiration, promote relaxation, cause positive changes in blood chemistry, and improve alertness, self-awareness, and concentration.

Further research and experimental evidence suggests that QiGong may be beneficial for:

QiGong is also practiced for longevity as it destroys/helps prevent free radicals (a major cause of tissue degeneration within the body).  It does this by stimulating a naturally occurring enzyme called superoxide dismutase, which protects skin damage from free radicals.

The Essence of Oneness

QiGong increases our sensitivity to and connection with the world around us, especially with nature.  Practiced outside in a natural setting, it can lead to a sense of interconnectedness with the surrounding elements, a new-found understanding of the beauty and vibrance of a flower, of feeling the sense of grounding and timelessness from an oak tree.  It can lead to a profound sense of understanding of the nature of reality, and that the universe is always perfectly balanced with everything happening in its own perfect time.  These feelings can stimulate our creative abilities through mediums such as art and writing.