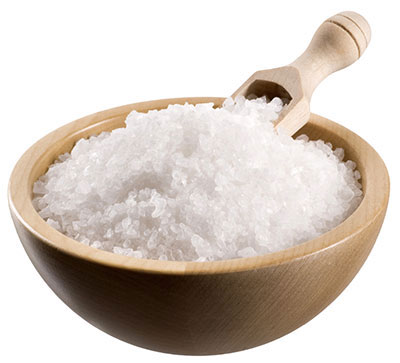 In its natural form, sodium chloride has been used for centuries to both season and preserve food.  A high quality Himalayan or Celtic sea salt can contain over 90 minerals.  Salt is formed from the combination of two organic minerals called sodium and chlorine and is known by the formula NaCl.

Our body contains a concentration of 0.4% salt, similar to that of seawater.  Salt is essential for our health, and without it we would not be alive.  It is a crucial electrolyte that:

The body cannot create salt and so we are reliant on the food we eat to get what we need.  The human body needs an estimated 200-280 mg of sodium each day to carry on essential bodily functions for survival.  Salt can be found in almost all foods such as fresh fruits, vegetables, nuts, seeds, meat, dairy, legumes, beans, and grains.

When taken in from whole, fresh foods without any salt added, it is in its balanced state and is assimilated appropriately by the body.  But when we add excess salt, whether refined or unrefined, then we have to be careful.  The average American eats in excess of 4,000 mg each day, and this excess is now linked to serious health problems.

Natural, unrefined salts are those that are distilled directly from the earth, the ocean, or are taken in from whole foods.  Refined salts have been processed to strip away of all their nutrients.

The sodium content of natural, whole foods is extremely low in comparison to the processed and refined foods on the standard American Diet.  Not only are they low in sodium, they are also high in potassium to help maintain that delicate sodium/potassium balance.  This balance helps regulate our cellular metabolism, and prevents water retention in our cells that damages the fibrous mesh of the skin and contributes to the development of cellulite.

Any salt we add over and above that found in whole foods (e.g. the salt we use in cooking, sprinkle on our meals, or that is in packaged and processed foods), is added salt.

The salt we buy comes from a salted body of water such as the ocean or a salt-water lake.  In any given drop from the ocean, the following elements can be found:  85.62% sodium chloride and 14.38% other trace minerals such as sulphate, magnesium, calcium, potassium, bicarbonate, bromide, borate, strontium, and fluoride (in descending order of quantity).(1)

Regardless of the processing, both sea salt and table salt contain the same amount of sodium. The difference between the two lies in:

Iodine is a natural component of several types of sea salts.  Since the early 1900's, it has also been artificially added to salt to create "iodized sea salt" for treatment of those with goiters.  According to UNICEF, over a billion people in the world suffer from an iodine deficiency.  A contributing factor is a lack of eating whole foods that naturally contain iodine such as kale, cabbage, sea vegetables, Brussels sprouts, and dark green vegetables.  But the potassium iodide added to refined salt has been linked to an increase in hyperthyroidism when eaten in large quantities.

Except for fresh produce, added refined salt is found in almost every food item in stores, including:

Refined salt is also in almost every prepared restaurant dish unless you request otherwise.

Which Salts Should I Buy? 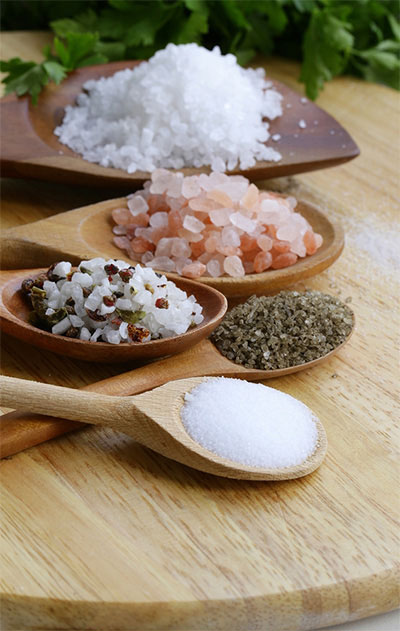 If you choose to use salt in cooking or with your meals, always use it sparingly and always use a high quality, unrefined, natural salt.  Not only does it contain minerals and trace elements, but natural salt a much better choice for flavoring.  This is because trace minerals in the salt contribute to subtle differences that enhance flavor.

Gourmet unrefined salts come in a variety of different colors including pink, gray, red, brown, and white.  The color differences are due to mineral and algae content.  Salts can also be smoked, adding an interesting and more complex flavor.  Each salt also has its own unique crystal makeup.

Black salts have a beautiful, black color due to the addition of activated charcoal, for example:

Gray sea salt is harvested from the bottom of salt ponds and has a higher mineral and clay content, which accounts for its color.

Make sure that there are no additional ingredients in the sea salt you purchase and that it is free of any chemicals, coloring, or additives.  It should also not be bleached, although some sea salts are naturally white in color.

Remember that ANY salt you add to your diet is excess salt that your body does not need if you are eating a healthy diet.  For cooking recipes and salads, add it occasionally and in very small quantities.

Even if you use a high quality salt, aim to use as little as possible.  Just because it is natural and a better quality, does not mean it is healthy to eat it in large quantities.  But rest assured, giving up excess salt isn't nearly as difficult as you think!

How to retrain your taste buds...